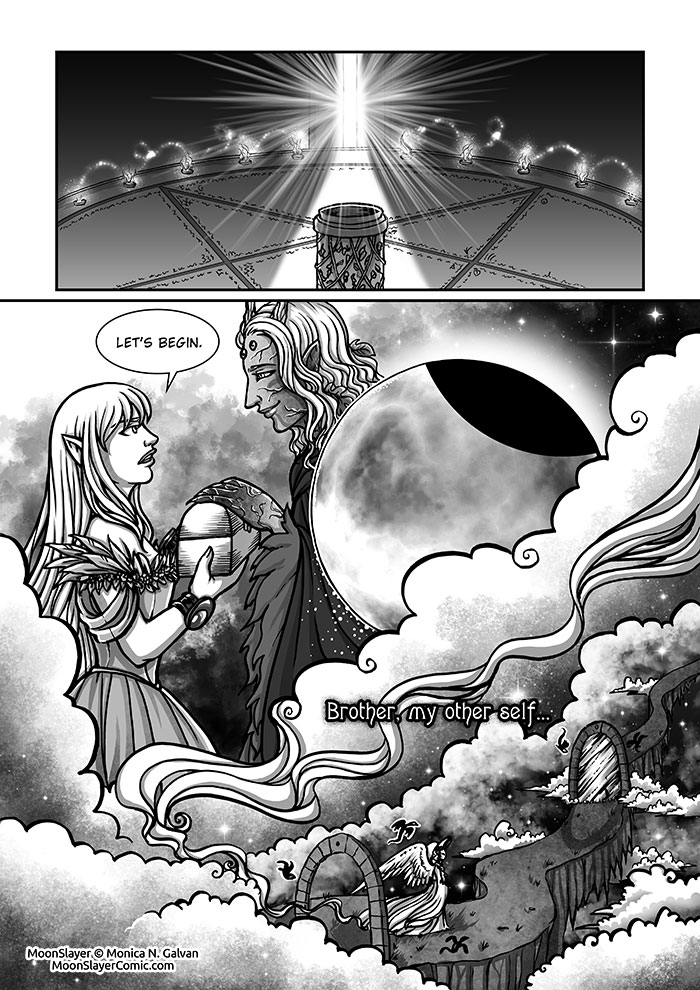 Did you think we were gone forever? Well…

In these months many things have happened…

I’ve been studying for the primary teacher exams, but they played me again in the second part with a killer question: “Are you working as a teacher?” and that’s where it all ended because with this last suspended part of 4 with a very good grade they will never call me :_D

But I still have a job, so… everything ok?

On the other hand, my family of birbs has actually increased… I’ve been very active on my secondary account posting a lot of pictures of them! (and no drawings in my main!).

I have also been collaborating with an association of exotic birds, El Nido. I’m making them the website!

I have to say, this detox from networking and constant imagery has helped me, as I’ve gotten back to writing harder, finished sketches for the rest of MoonSlayer Volume 2, and come up with a lot of new ideas!

From now on, you will have a new page every Monday. Remember that you can follow me on my networks (in the menu on the right) and that now that it’s less hot I’ll be back with my livestreams on Twitch!

Hello everyone! As previous years, here we come with a new issue of VDSD! This means that we have a new sexy picture to add to our collection!

This year I didn’t had time to do a whole new picture as detailed as previous years, so I give you an oldie but goodie I didn’t release before!

Click on the pic to get the full picture! (You have to vote the comic, and by the way you’re helping us to be discovered by others!)

These are the last years’ entries!

Be careful, some of them have explicit WSFW content!

I have some news to share regarding the comic.

I’m currently working on Chapter 9, having 21 pages pencilled (the whole chapter is written) and 8 new pages inked, scanned and in formatting/lettering/grays stage.

I wanted to tell you that I’m ok, thanks so much for your messages!

I found a new job, I’m happy with my little birbos and all is fine. I’m still dealing with some stuff regarding my prev job, but I’m ok the most of the time.

Not so good news: I want to start studing again to try to be a public teacher, so the updates may be minimal this year.

I’m still organizing my weeks to have a bit of time to work on comics/socialize. And that’s all :_D

Not sure yet if it’s okey if I update the comic little by little instead of weekly or start once I’ve a good buffer.

NAAN already did a secret santa drawing of Syrma and Deneb you can see in the guestart gallery!

Today we have something else to celebrate!

I had planned to start the chapter this week, but it didn’t happen. Still, the storyboards are going at pace and after a first review…. I’m very happy with the result! Now all that’s left is printing and inking. I’ll probably start streaming the whole chapter on Twitch. I know there are a lot of people who don’t like to come here for fear of spoilers, but I usually ink the less “dangerous” pages for the readers there 😀

Now it’s really happening! At the 5-year celebration we didn’t see Puck, but then he hadn’t yet made an appearance in the comic (well yes, but not as a member of the main group) and in the short time he’s been around he’s become a favorite of the readers.

A round of applause for our favorite god of mischief! Stripped of his divinity by Deneb – and cast out from among the gods for aiding Syrma – Puck seeks a way back while collaborating in his Master’s plans. The question is… Who is he really working for, and will we ever find it out?

To discover it, don’t miss the next chapter, where everything will be revealed!

Next one is Alherani (Henna) probably my favourite character to draw!

She was the character that most changed from the first sketch, and even her species was a mystery in the first manuscript, but later became the most iconic.

Henna is on a quest to recover her wings, something that supposedly will end with the illness that she’s suffering… and on the next chapter she’ll confront her former lover and queen.

How will it end? Things are not looking good for Alherani. Her illness is spreading faster and faster…

The pencils for the next chapter are 2/3 ready and the next part (inking) will be the most exciting! I’m not following the original plan (starting the ball the same day of Syrma’s birthday, heh) but the pages are turning great!

So, let’s start with the second part of this particular celebration!

Now it’s Menkar’s turn! Kaeso Cetus Menkar is our beloved dragon guardian, who went from a defeated, banished general, to a stoic and deadly bodyguard, and then to mentor, a friend, a lover… and won his freedom before fulfilling his promise… to make a new one from his own will to the person who meant the most to him.

He’s also the character who got less covers, and pictures in general, why were you se neglected all these years, Menkar?

Who would have thought that I would be working on this comic after 10 years? MoonSlayer has accompanied me through a stage with many changes in my life, after finishing my studies and getting fully into illustration, during the oppositions, during the yeses and the noes, especially the noes, during the illness, the loss, the adventure of starting in another country and coming back with my tail between my legs, the one of building something new, when I have been sad, when I have stopped being so sad, during the solitude…

There are SO MANY things…but here we go.

Syrma, Syrma…. What do we know about Syrma? All this time we have watched her grow up, cursed by a goddess, train and finally face her mission. We have seen her let go of her guardian’s hand, of facing hordes of undead, of taking the reins and defying a queen… now…. will she be able to escape from this dream?

Thank you for following us throughout this journey and what’s left of it!

Hello everyone! Long time no see!

I’ve took the last months as holidays, since summer here is terrible for making comics both traditional and digital. I’m also quite well, since I found a new job quickly (and accepted that my previous one was toxic as hell) and after a proper mourning period I spent part of my “holidays” to raise a pair of chicks, my new helpers Bilbo and Willow! (you can follow their adventures in my personal Insta).

With helpers like these ones is hard to make comics, I have to say it.

I’ve also been working on some personal projects, novels and illustrated books that I plan to send to various publishers soon.

My idea was to resume the updates of MoonSlayer asap. My initial plan was to start this chapter in September, since this chapter happens in Autumn’s Equinox. But I started sketching the new chapter last week and I want to make something memorable with this chapter since is the end of Book Two. Also… I wanted to Kickstart the First Volume in October but with the current situation is almost impossible 🙁 I really need someone to help me with this because at this rythm I wont see this on paper… ever.

Anyway, I hope you’re well! Thanks so much for your kind words during this time. I hope summer ends soon! 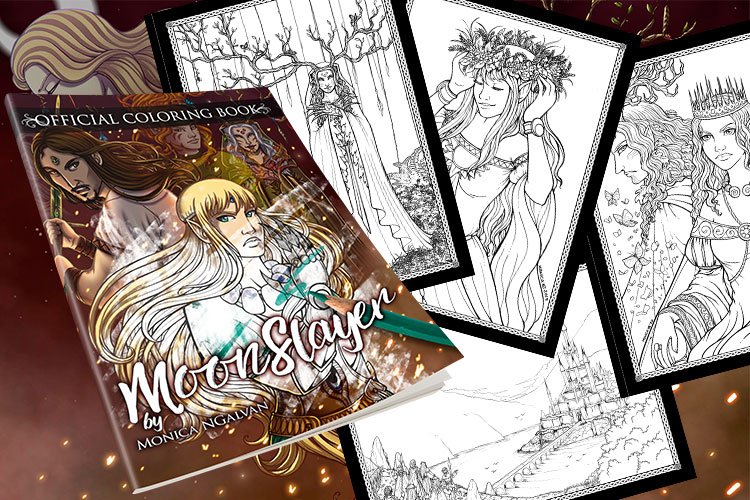 Epic and tender scenes, dragons, fairies, elves and gods!
Even if you don’t like coloring books, this is a great ink illustration artbook of the comic to collect 🙂

The illustrations are printed on one side only for easy removal and display, or use in your personal projects.

This coloring book is, like the comic, +16. The linearts are intended for practising shading and elaborate techniques, with the right amount of detail.

I colored them before, now it’s your turn!!

The site got a small renewal

Following my plan of renewing the layout of the website, I made some changes to the layout (to make it more mobile friendly) and deleted the intro page. This way the news section will remain more visible and the navigation will be easier.

I also have been eliminating unused plugins to keep it as simple as possible. Since the comic plugin is no longer updating I’m looking for other alternatives, but at the moment it works, so… good!

I also added some missing fanarts and illustrations to the galleries, that got a small refresh too!

Leave your thoughts · August 24, 2020 11:00 am
1 2 3 … 11 Next »
MoonSlayer, High Fantasy webcomic.
Updated every Monday.
Cursed from birth by a vengeful moon goddess, Syrma must find the way to challenge her fate by killing the being who sentenced her to death.
Featuring this week…
Available languages :